Corruption is a major drawback in enhancement of road safety in the country, Fred Majiwa, head of program and communication at St John ambulance has said.

Despite increased government presence on the roads, he notes, the number of road fatalities has remained unchanged. According to government statistics, about 3000 Kenyans die through road accidents every year.

Majiwa decried the number of fatalities blaming corruption for crippling efforts by the National Transport and Safety Authority (NTSA) to reduce accidents on the road. “The constant three thousand deaths reported every year has never been brought down because even if vehicles comply with safety standards, someone somewhere will take bribe and leave someone flouting rules with impunity,” Majiwa said.

“Corruption in Kenya roads should be classified as a part of national disaster; if we ignore it, we’ll just move in circles, as it is not in the mandate of the road safety authority to handle it,” he added.

The Public transport sector, commonly known as Matatus industry, has struggled with regulatory failures and widespread corruption. The Khs200 billion industry has no state ownership. The sector accounts for 5 per cent of Kenya’s GDP and employs approximately 300,000 Kenyans as drivers, fare collectors, and bus stop attendants according to Oxford Business Group (OBG).

According to Majiwa, most accidents on Kenyan roads occur due to improper judgment when overtaking. He also called on drivers to be patient and avoid careless driving and speeding.

Even with the introduction of the Alco blow, most drivers drive under the influence of other substance such as miraa, beating the Breathalyzer test. “We now see most of these drivers have devised ways of evading law as they still drive while on banned intoxicating substances on roads.

Most crew resort to cheap drugs that cannot be detected by NTSA’s Alco blow gadgets. Most drivers resort to chewing miraa popularly known as Mogoka,” he adds. He also urged the government to put more emphasis on educating schoolchildren on importance of road safety noting that would result to behavior change.

At the same time, he also urged parents to desist from letting their underage children drive. “Road safety should start at the very basic level of nursery school in order to tackle flouting of road safety rules and tackle symptoms and their causes.

For meaningful progress to be seen road safety issues, road safety should start at home. For example, when a parent gives his car keys to his ten year old to move his car from one point to another at his home, this is a wrong culture since this child will know that it is not a crime to drive without a driving license,” Majiwa observed during an interview with Safari Njema. Pedestrian account for the highest road fatalities in Kenya.

To curb this trend, Majiwa urged NTSA to invest in behavior change campaigns. He however lauded the authority for its initiatives in reducing pedestrian deaths. He cited installation of safety panels on the road, construction of footbridges on busy highways and deployment of traffic marshals to control traffic as a leap towards the right direction in road safety.

To teach children road safety, Ma jiwa urged traffic marshals deployed at schools to also teach children safe road crossing. “In most cases, we see pedestrian crossing marshals carry posters with assign “STOP” and kids just cross over. The marshals should teach children how to look left and right and only cross when the road is clear,” he said. 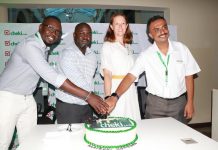 Captain fully responsible for grounding of Ever Given in Suez Canal: authority

Latest News Editor - August 10, 2021
0
Passenger train services in Uganda's capital Kampala have resumed after the country lifted a 42-day lockdown on July 30 following a reduction in the...

Latest News Editor - June 25, 2021
0
In line with its mandate to keep the Kenyan skies safe and secure, the Kenya Civil Aviation Authority (KCAA) has released procedures to control...
- Advertisement -